A positive image produced on a glass plate with a gold-tone pigment applied to the plate’s emulsion side over the developed image is known as an orotone, and is a photographic process that was most prominent during the late 19th century through the 1940’s, during a time when the aesthetic use of bronze power pigments in works of art and décor was prevalent.

Due to high cost, gold was never used as a backing pigment, and bronze pigment mixtures with copper and zinc metals were used instead.  The color tone of the pigmented backing material is dependent on the amounts of copper and zinc in the mixture, as more copper will exhibit a truer bronze tone, and the more zinc added will shift the color to a luminous yellow-gold tone.[1]  With their high degree of reflectivity, transparency and brilliant gold tone, orotones (also known as Curt-tones, Doretypes, and goldtones) seem to exude the appearance of a varnished painting rather than a photograph.

The photographic collection at GWAC contains two orotones; one with a positive image on a glass plate, and the other image resides on a polymer film.  Using the Bruker Tracer III-V+ XRF spectrometer, both pigmented backing materials were analyzed in order to determine their elemental compositions. 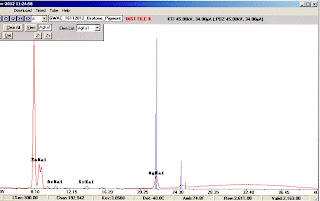 “#4 Moonlight on the Lake” (stamped in red ink on the back of the frame containing the orotone):  The positive image is on a traditional glass plate and has a bright yellow sheen within the backing pigment.  Elements of zinc (Zn) and copper (Cu) were detected, and originate from the brass pigment.  Interestingly, arsenic (As) is also a detected element, and originates from the glass rather than from the pigment.  Silver (Ag) and strontium (Sr) elements are also included in the spectrum, and are components within the photographic image. 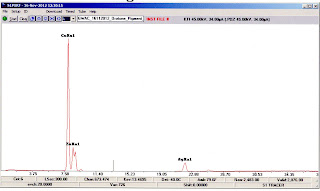 Cliffside Orotone:  This orotone consists of a positive image on a plastic film, rather than the traditional glass support.  Due to the incorporation of the polymer support material, this orotone must be more contemporary than “#4 Moonlight on the Lake”.   Similar to the previous orotone, Cu and Zn peaks are observed, confirming that the pigment on the orotone's reverse is also a brass alloy.  A silver peak from the image side is the only other element observed in the spectrum.