Carbon prints were patented by Joseph Wilson Swan in 1864.  Swan began the Autotype Company in 1868 for the commercial manufacture and distribution of carbon tissues.  The sample book below was published sometime during 1914-1923. 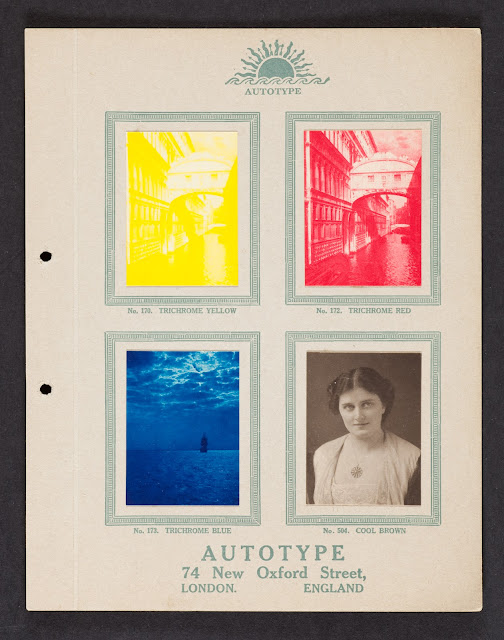 Carbon printing is a tonally rich process in which non-photographic paper is coated with a gelatin emulsion (mixed with pigment).  This sheet, known as the carbon tissue, is soaked in a solution of potassium dichromate and dried.  Once dry, the sensitized tissue is contact printed with a negative.  This contact printing process causes the dichromated gelatin to harden in proportion to the light intensity.  Sections which receive more light will harden completely; alternatively, sections that receive less light will remain soft.

The exposed tissue is then soaked in cold water and placed in contact with a receiving paper (coated with a layer of gelatin).  The papers are pressed together and soaked in hot water.  While soaking, the carbon tissue backing is gently peeled away, leaving the dichromated gelatin exposed to the hot water solution.  Unhardened gelatin is then removed by the solution, producing a positive image to develop on the receiving paper.  As a result, a printed carbon tissue will never exhibit a completely flat surface.  Carbon print, unlike many traditional silver-based photographic processes, display strong image permanence and are not susceptible to atmospheric exposure or fading.


A similar method called the carbro printing process was introduced in 1905.  This method, as with the carbon process, relies on pigmented sheets of dichromated gelatin.  The major difference between these two processes is that the carbro method uses a bromide print – instead of sunlight exposure – to chemically react with the tissue and cause the gelatin to harden.

By comparing the spectra below, one can observe how some elements are conserved from one toning process to the next.  These spectra do not identify whether the Autotype Company produced the tissues using the monochromatic carbon or carbro printing process. 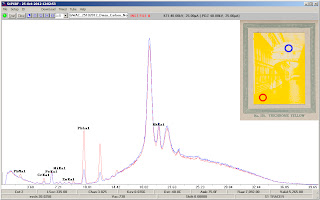 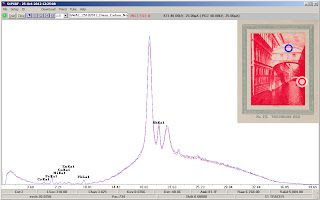 Some spectra do not demonstrate a significant change between maximum and minimum densities.  In the spectrum overlay on the left, this lack of change could be a result of organic materials used in the red pigment.  The nickel (Ni) and rhodium (Rh) peaks found in all four prints are generated by the XRF instrument. 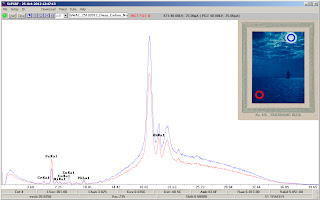 There are two peaks to focus on when looking at this spectrum: iron (Fe) and zinc (Zn).  The iron peak is significantly larger in the maximum density.  The pigment used in the image could be Prussian blue.  Prussian blue contains Fe4[Fe(CN)6]3 and started being used as a pigment in 1850.  The zinc peak is larger in the minimum density.  This can be attributed to the presence of zinc in the paper support.  The maximum density are will have a thicker layer of hardened gelatin, and the zinc peak, therefore, appears smaller on the spectrum. 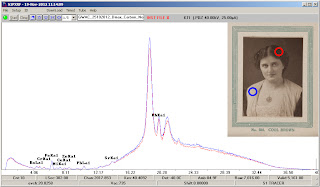 In addition to the elements already identified in the previous spectra, the final spectrum identifies barium (Ba) and strontium (St) to be present.  Barium sulfate (BaSO4) is found in the baryta layer of many photographs.  Baryta is used as a paper coating under the emulsion; the purpose of a baryta layer is to cover the fibrous texture of the paper.

Posted by Unknown at 5:08 PM No comments: