Carbon tissue prints and Woodburytypes are two different photographic processes, with each comprised of pigments suspended in a hardened gelatin layer, and it is notoriously difficult to analytically discern one from the other.  Both photomechanical processes require the image to be transferred from a negative to a paper support, and as they lack any of the major metallic elements observed in photographic materials, are primarily pigment-based prints.

One difference that separates the two process types is that carbon tissue prints require their backing paper to be sensitized in a potassium dichromate solution before being exposed to the light through the negative, leaving the print with a dichromated gelatin layer.  An image created from the Woodburytype process does not retain a dichromated gelatin layer, as the final image is made from pouring a liquefied gelatin (not dichromated) and pigment mixture into a lead sheet mold of the image, which is then pressed into a sheet of varnished paper. 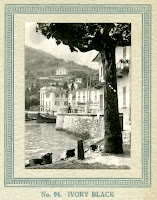 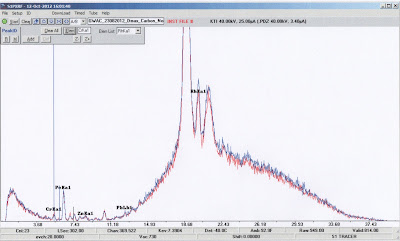 Carbon Tissue Print – No. 94 Ivory Black, from a 32-variety Colour Chart of Autotype Carbon Tissues complied by The Autotype Company, London. (c. Late 19th century).  Red spectrum = Dmax, blue spectrum = Dmin.  A chromium (Cr) peak set is observed in the spectrum, with the Kα peak located at 5.4417 keV.  The presence of chromium in the XRF spectrum confirms the dichromated gelatin layer, an essential component of the carbon tissue print. 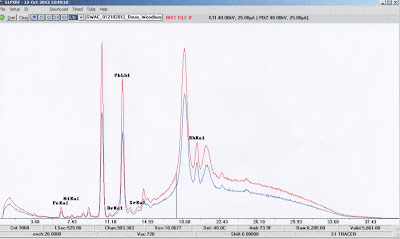 Woodburytype – Miss Attalie Claire, from “The Theatre”, February 1861.  Photographed by Alfred Ellis, Upper Baker Street, London.  Red spectrum = Dmax, blue spectrum = Dmin.  Unlike the carbon tissue print spectrum, the Woodburytype lacks the chromium peak set, and therefore does not have a dichromated gelatin layer.  Lead (Pb) peaks are also present in the spectrum, and stronger in signal than the paper support’s lead peaks.  The presence of lead could be from the Woodburytype photomechanical process, when the dimensional matrix of gelatin and pigment is pressed into a lead sheet mold, creating an intaglio impression of the image.